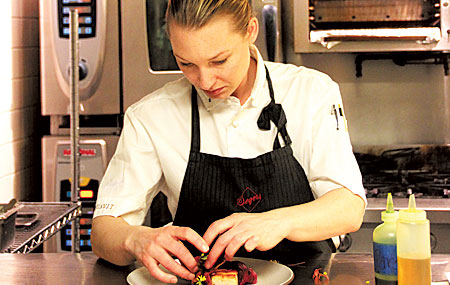 Emma Bengtsson grew up in a small town on the west coast of Sweden and became interested in the culinary arts at a very young age, thanks to her grandmother, who was an avid home cook. The baking and cooking of Bengtsson’s youth grew into professional aspirations when she enrolled in Stockholm’s Hotel and Restaurant School, where she trained in every restaurant role, from savory and pastry to waiting tables and hostessing.

It was while working at Edsbacka Krog–the only Michelin two-star restaurant in Sweden at that time–where she discovered her love specifically for pastry, and continued to work in the kitchen there for four years after graduation. She then took a position at Restaurant Prinsen, one of Stockholm’s oldest and busiest bistros. From there, Emma Bengtsson joined Operakällaren, the award-winning historical restaurant located in Stockholm’s Opera House, where she remained for nearly five years.

Former Aquavit Executive Chef Marcus Jernmark recruited Bengtsson in 2010 to join the restaurant as Pastry Chef. Bengtsson quickly became known for her creative interpretations of classic Scandinavian desserts, as well as establishing a new bread program. Her style was reflective of the region’s penchant for local products, progressive techniques, and continuing traditions; and it was well received, as Aquavit was recognized with one star in the Michelin Guide New York City in 2013 and 2014.

Håkan Swahn, the owner of Aquavit, saw talent and fresh perspective in Chef Bengtsson’s skillset and offered her the role of Executive Chef in spring 2014. She accepted the job, and since then has injected the critically acclaimed menu with her personal style and experience. In October, her work garnered a second Michelin Star for Aquavit, making her the second female chef in the U.S. to run a two-star kitchen and the first ever Swedish female chef to do so.

Who or what inspired you to start a career in the restaurant industry and where did you study culinary arts?

My grandmother most of all. She was an avid cook and I have so many happy memories cooking with her, from baking Swedish cookies and pastries to preparing Sunday evening pot roast. My love for her commingled with my passion for food to shape my professional outlook. I graduated from the Stockholm Hotel and Restaurant School.

You moved to Manhattan from Sweden in 2010 to pursue a pastry career, how did you land the role as executive chef and what were some of the major changes you had to incorporate?

While I was the Pastry Chef at Aquavit for three years, during that time, I still contributed to the savory menu. The process was always collaborative so if a tuile or sorbet had a savory profile, pastry was responsible for the production. In addition, we always tasted the entire menu collectively and I always provided input.

Those factors, coupled with the fact that I have a well-rounded culinary education, made the transition fairly smooth. From a management perspective, I now have a lot more responsibility as I’m overseeing three kitchens: private events, pastry and savory.

You are part of a rare group, being one of three women who hold Michelin two-starred distinction. How does it feel to be put in such a category?

It’s an honor, of course, but with the accolades comes a lot of pressure to be role model to female chefs both in and outside of the kitchen.

Explain your cooking style and how you operate your kitchen?

My cooking style here at the restaurant is one that pays homage to Traditional Swedish cuisine – filtered through my taste memory of it and subjective vision, meaning my preferred ingredient vocabulary and sense of composition.

My kitchen style is derived from what I experienced at Edsbacka Krog, my first restaurant job: it is to educate and support the cooks and create an approachable environment. It is very important that cooks feel comfortable to ask questions and that they understand the process: why we make things a certain way — instead of just getting it right by reading a recipe correctly.

It is also important to provide a sense of family and camaraderie, as we all spend more time with one another than our own families and rely on one another to do our respective. These principles are what I try to impart and practice in my kitchen.

It’s hard to put a brand on Scandinavian food, how has that evolved?

The truth is Scandinavian food is far too broad a term to accurately describe the true range of food produced in a region that encompasses the Faroe Islands, Greenland, and Iceland, as well as Norway, Denmark, Sweden and Finland. In time, however, I expect to see greater regional distinctions, partially driven by the need of restaurants to create new niches. 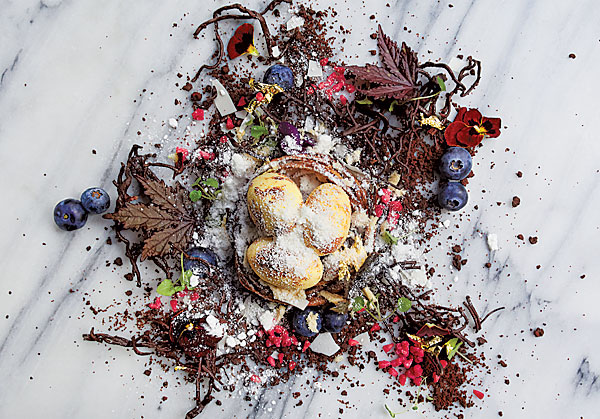 What are some other roles on the business side of Aquavit you take on?

I am responsible for monitoring the kitchen’s food and labor costs and maintenance of kitchen equipment.

What’s your opinion on local sustainability? And do you look for loyalty from your suppliers or do you go to bid each week?

I support producers of local and sustainable ingredients as much as possible as long as the quality is to my standard. Loyalty is extremely important for me, too, and I look for that first before merely looking at the price.

What role does the vendor community on both the equipment and food supply side play? In your opinion, is today’s salesperson providing the level of service you need to succeed?

The big issue is not the level of service provided by salespeople but rather repair people.

Too often it’s a problem getting timely, cost-effective repairs. More companies and salespeople need to take greater ownership of the repair side of things.

In terms of food supply, my most valued suppliers like Solex Fine Foods and The Lobster Place know exactly what I need and understand my standards.  They will not send a product that I have to send back. Naturally, there are a few that disappoint from time to time. I won’t name names, but they know who they are [laughing].

What are your thoughts on the Metro New York restaurant industry compared to the rest of the country?

I think it’s unquestionably the most competitive restaurant market in the country. There is high quality in every sector, from casual to fine dining.

Talk a little about the buying process for foodservice equipment. What do you look for in a piece of equipment? Do you attend National and regional shows for products? And when purchasing equipment, do you work with local dealers or shop online?

I normally don’t have time to attend shows. There are a lot of equipment brands like Hobart that I like and have proven to be reliable. Unfortunately [laughing], however, we don’t have the budget to buy all the gadgets I would like. You know, like most chefs, my eyes are bigger than my wallet. Online is the first place I go to find equipment or to research what is out there.

What are your short-term and long-term goals?

In the short term, to continue to inspire and lead my colleagues and make the restaurant better. Over the long-term, I would like to become a citizen and own my own place (house) to make New York my home.

Why Many People Don’t Want to Work in Restaurants Anymore