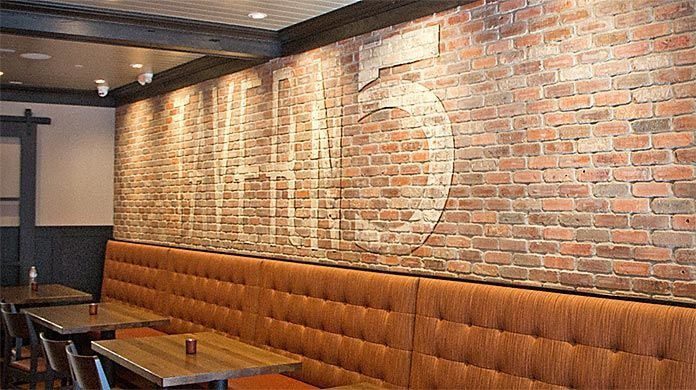 Tavern 5 is a restaurant in Pompton Plains, New Jersey has opened this month. The space, formerly Gilly’s, was purchased by the Carbone brothers who are four newcomers to the restaurant industry who run various businesses in the area including synthetic grass installation, outdoor lighting and irrigation.

Headed up by Chef Anthony LoPinto, Tavern 5 focuses on Italian American classics and other upscale casual dishes. After purchasing Gilly’s, the Carbone brothers gutted the entire space, created a new floor plan, and installed everything from new foundations to a brand new kitchen. Gilly’s had employed Economy Paper and Restaurant Supply in Clifton, New Jersey as their supplier and designer, a company Tavern 5 also entrusted to help with getting the restaurant up and running.

A family owned company for three generations, Economy has been supplying and designing for restaurants since 1932. The task of outfitting the kitchen was handed to Michael Konzelman of Economy, with some of the primary challenges being outfitting a kitchen that was partially in a basement and providing up to date, efficient appliances that would make the most of a small floor plan.

“Tavern 5 wanted to do Italian-American and classic American comfort food, so we thought it would be great to have a pizza oven in the kitchen” said Konzelman. This matched up with LoPinto’s Italian American background and Tavern 5’s desire to sell artisanal products. Therefore a WoodStone oven was installed in the kitchen to ensure top quality pizza but also give the chef the ability to experiment with things like finishing dishes under high heat or cooking fish on cedar planks.

In addition to the pizza oven Konzelman pushed for a three foot Accutemp griddle that would maximize efficiency in a small space. “The new three foot griddles are so fast at heating, they have the capacity of a five foot griddle. When you put a product on the griddle there is no cold spot.” Those griddles are new to the industry and the technology is not as well established but the reward is a consistently hot, easy to clean surface. Konzelman says the ability to get a griddle back to temperature instantly and make full use of the space is important when Tavern 5 is up and running and filling orders fast.

Ventilation was more difficult considering the building is older and part of the kitchen is downstairs. “When part of a kitchen is in a basement, it is difficult to ventilate but we got it done.” The older building could have presented zoning issues or large repair costs but Economy and Tavern 5 put in epoxy floors that replaced the old tiles, saving them money on repairs in the future.

With a high volume of food and beverages that need refrigeration, Tavern 5 and Economy chose a Continental walk in refrigerator, a product that has the most space for the price and is American made in Pennsylvania. Because the food is American and Italian style comfort food, fryers were a necessity. Pitco fryers were used, a product Konzelman said he loves. “They are one of the best heavy duty fryers and we have always been a big fan.”

The kitchen is split into two, one part upstairs and one part in the basement. To save money and separate the two spaces, the upstairs kitchen is for serving the restaurant while downstairs will be mostly catering and lighter duty cooking. “We spent the most money on the appliances that will get beat on every day in the kitchen,” said Konzelman. For downstairs there are more fryers and a combination oven but there was no need for additional cookware or speciality ovens like the WoodStone upstairs.