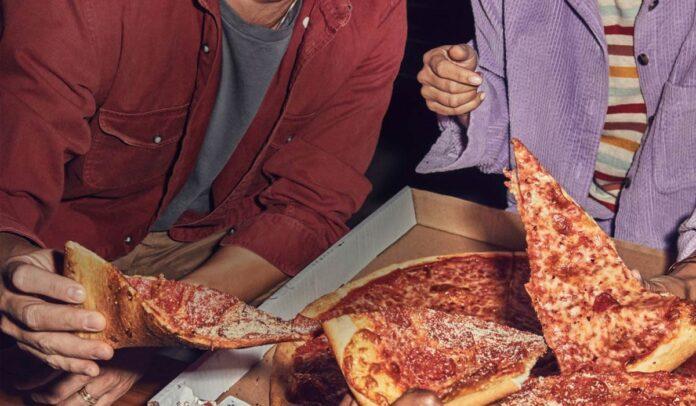 At the Height of the Pandemic, DC’s Roaming Rooster Thrives With Uber Eats

Every office worker in downtown Washington, D.C. knows: Roaming Rooster is a must-try. What started out as a fried chicken food truck roaming busy D.C. neighborhoods in 2014 quickly grew into a booming business with two storefront locations and a third one opening in January. And Roaming Rooster has relied on Uber Eats since its early days.

“People saw us on Uber, and they trust that platform, so they decided to try our food. And once they did, they kept coming back and ordering,” Michael Habtemariam, co-owner of Roaming Rooster says.

But when the pandemic hit, Roaming Rooster’s food truck had to hit the brakes. With office employees working remotely, there was simply not enough demand to sustain the business. Roaming Rooster shifted focus to its permanent locations and doubled down on delivery. The company used the opportunity to perfect its approach to takeout orders, leaning on insights it gathered through the Uber Eats app. And customers have responded, praising Roaming Roosters with positive reviews complimenting them for changes such as their thoughtful, safe packaging.”

“We’re on the front page on the app1 because of our positive reviews. If people are looking for fried chicken, we’re up there,” he says.

Despite the immense challenge of maintaining restaurant success during the pandemic, Habtemariam considers Roaming Rooster one of the lucky ones. While it owes much of its success to its dedicated delivery effort—the restaurant sees 30% in sales via Uber Eats—its reputation and respect are no accident. Roaming Rooster has reached out to its community, serving free food to health care workers, and the community has reciprocated, ordering from Roaming Rooster whenever that craving for delectable fried chicken strikes.

Smoothie Spot in Miami prides itself on offering healthy, customizable menu items with the freshest ingredients available. To make sure the restaurant continually delivers on that promise, the team relies on data and analytics—and Uber Eats Manager is an essential tool for tracking performance.

That’s been especially true since the COVID-19 pandemic. When shelter-in-place rules first went into effect, Smoothie Spot had to close three of its six locations for over a month. But the remaining three locations saw a surge in delivery—and with the help of Uber Eats data, Smoothie Spot was able to reopen all its locations. Smoothie Spot’s owner Daniel Carmona estimates that nearly 50% of his business now comes in through the platform, increasing from about 60 orders a day per location to over 100.2

Promotion data was one metric Carmona and his team leveraged to help grow Smoothie Spot’s delivery business. Earlier this year, Smoothie Spot launched its first marketing campaign, offering buy-one-get-one and free items to customers via Uber Eats. As a result, Smoothie Spot’s conversion rate in the app rose to 92%–customers liked the offers they were seeing. But for promotions to provide long-term success and keep customers coming back for more, the food has to be of the highest quality, Carmona says. To that end, Smoothie Spot takes advantage of customer feedback in Uber Eats to spot areas for improvement. 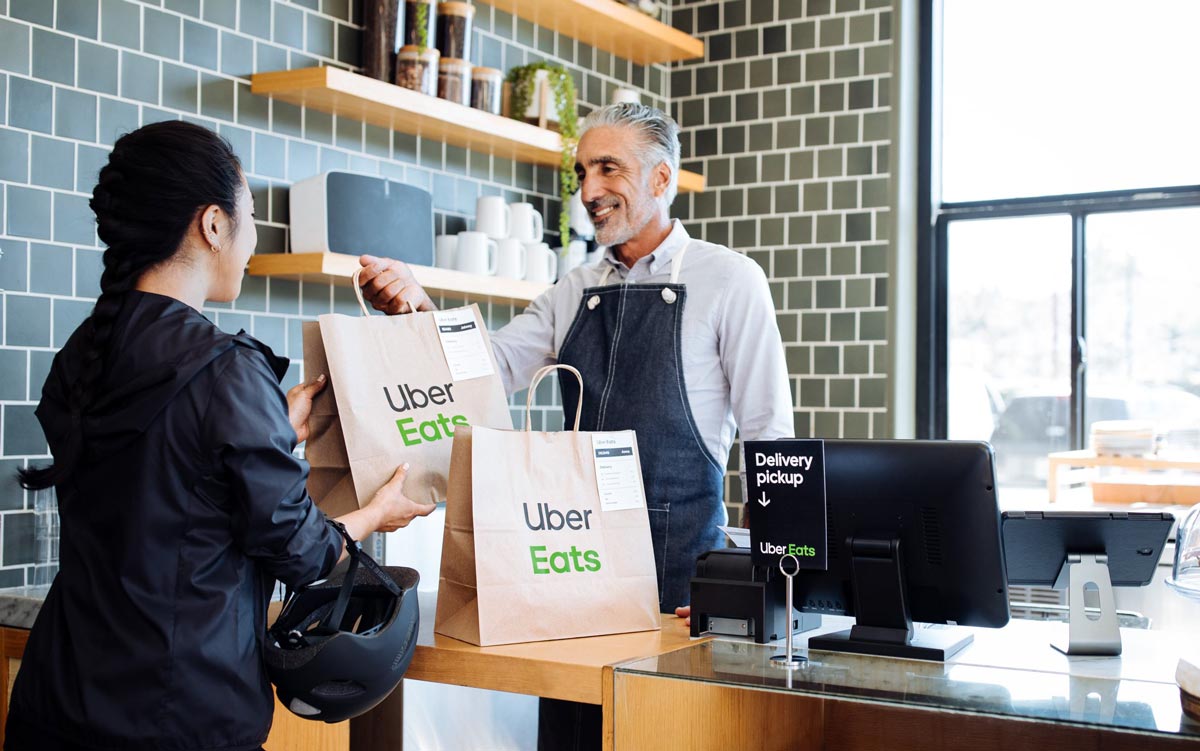 “We check all the Uber Eats reviews daily and reach out to managers and run through what we need to work on,” Carmona said.

If there’s ever an ongoing issue with a menu item, the team at Smoothie Spot makes operational changes to help ensure only the best dishes are delivered to customers. For example, some of Smoothie Spot’s most popular menu items, like cold smoothies, acai bowls, and salads need to be delivered quickly to maintain freshness. These items received poor reviews because they weren’t withstanding long delivery trips in the Miami heat. Carmona spotted these reviews early thanks to Uber Eats Manager and leapt into action, investing in better packaging and making adjustments to prep timing for these cold dishes.

The data and insights from Uber has helped grow Smoothie Spot’s business since the pandemic: the restaurant plans to open two new locations by the end of the year.

How Evos Went Exclusive with Uber Eats During the Pandemic

Michael Jeffers and his co-founders had a vision that was ahead of its time when they started fast-casual restaurant EVOS… Feel Great Food! back in 1994. A riff on the word evolve, EVOS takes the All American

Meal of fast food to the next level: EVOS uses the fresh, organic ingredients (think: naturally raised beef with no added hormones or antibiotics) and uses earth- friendly methods and materials to make it healthier for people and the planet—while still keeping it delicious and affordable. The founding team had little restaurant experience, so Jeffers says it was important to keep testing and iterating on the concept. With this process, they’ve grown the business from an 800-square-foot test location to four stores across the Tampa Bay & Miami/Pinecrest areas of Florida.

For a group defined by staying ahead of trends, it’s no surprise that the team was early to the delivery game. EVOS uploaded their menu to delivery partners beginning in 2016, adding Uber Eats as well as other major national and local platforms. But offering delivery is a challenge for a business built on fresh, healthy, all-natural ingredients, which can be more difficult to transport and keep fresh than traditional fast food.

That means the delivery timeline is critical for EVOS. Left sitting too long in the packaging, food quality begins to deteriorate—like air-baked fries (Airfries™) getting soggy. So Jeffers says his team doesn’t put anything in packages until the delivery person arrives. As a result, if delivery people show up late, this can cause order fulfillment headaches in the kitchen.

“We were waiting for delivery drivers to show up on most delivery platforms,” Jeffers said. “We had errors, food wasn’t picked up on time—it was an operational disaster. But Uber Eats has an extensive delivery network, so a delivery person was in our restaurant within minutes4, consistently. We can plan better knowing that there’s going to be a consistent and quick turnaround time.” 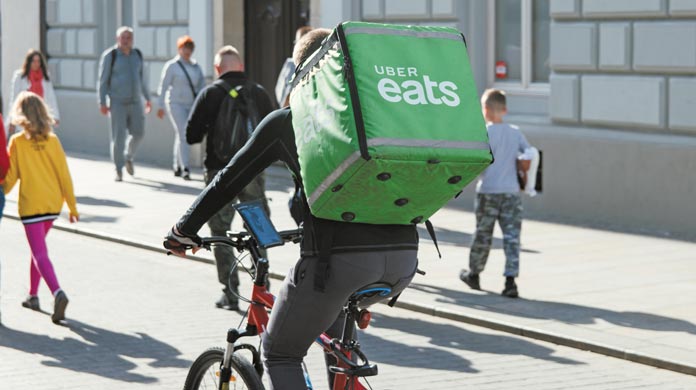 In July of 2020, even though it was during the peak of the pandemic, Jeffers and his team decided to drop the other delivery platforms to partner exclusively with Uber Eats.

“It was uncomfortable during COVID to make this decision,” he recalls, “But Uber Eats did up to ten times the volume3 of the other platforms. Whatever we lost in sales, we more than made up on Uber Eats alone—and we didn’t have complaints coming in about food being late.”

Jeffers also worked with Uber Eats to double down on his promotion strategy in the app. The goal was to increase the average order size—and he’s seen a $2.50 average increase in ticket size using buy-one-get-one and fixed promotions on high-margin items like free Airfries with a $25+ purchase.

“This move to Uber Eats exclusivity was a win-win all around, Better for our Delivery Guests, Better for EVOS and better for Uber Eats,” he said.

Why Crazy Poke Prefers Uber Eats Over the Competition

Fish connoisseur and founder of Crazy Poke, Gonzalo Rubino, knows how freshness should taste. Before opening his Hawaiian-inspired poke spot in Miami’s trendy Wynwood neighborhood, he owned a fish company, delivering local catch to restaurants. Now a restauranteur, Rubino knows that delivery speed and reliability matter. Crazy Poke needed a partner that would deliver the poke bowls quickly and with care, keeping them cold to withstand the Miami heat and ensuring that toppings stay in place.

While Doordash and Grubhub promised to provide the efficiency Crazy Poke needed, it was Uber Eats that delivered—literally. “Other apps seem to lack delivery people,” Rubino says. “Sometimes with other apps, it takes too long to get a delivery person. Why am I making an effort to have the food ready quickly, only to have it sit there while the delivery person arrives?” According to Rubino, delays not only jeopardize the freshness of the poke, but also frustrate customers waiting for their food.

“Ultimately, Uber Eats is simply a better partner, according to Rubino. Even when the COVID-19 pandemic hit, Crazy Poke continued to thrive thanks to Uber Eats. Uber Eats’ flexible promotions, including buy-one-get-one or dollars off an order, were instrumental in enticing new customers to try Crazy Poke, and once they ordered, they kept coming back. “We saw a 15% lift in delivery from Uber Eats over the past few months5,” Rubino says. Typically, Uber Eats drives about 25% of Crazy Poke’s delivery business. “They just do a great job,” he says.

1  Based on self-reported data from Roaming Rooster in 2020. Average delivery sales via delivery will vary based on restaurant size, uptime on the Uber Eats app and other factors.

2  Based on self-reported data from Smoothie Spot in 2020. Average delivery sales via delivery will vary based on restaurant size, uptime on the Uber Eats app and other factors. Actual results may vary.

3  Based on self-reported data from EVOS in 2020. Avg. basket lift for free item and BOGO promotions is ~10%. Actual results may vary.

4  Average time between restaurant accepting an order to delivery person pick-up was 14 mins in 2020, versus the national average, 20 mins. Actual results may vary.”

5  Based on self-reported data from Crazy Poke in 2020. The lift in avg. monthly orders for small businesses and restaurants adding delivery to their offering is ~10 – 30%. Actual results may vary.

Editor’s Note: These stories are sponsored by Uber Eats. In accordance with FTC guidelines concerning use of endorsements and testimonials in marketing, please be aware of the following:

The case studies presented here reflect experiences of restaurants that have used our products and services in some way. However, they are individual results and results may vary. The testimonials are not necessarily representative of all those who will use our products and/or services.

The information contained within these testimonials are self-reported by the restaurant featured unless otherwise indicated as based on internal Uber data. As such, they may not be indicative of current or future performance for prospective or other platform users. This information should not be considered a guarantee of future performance using the Uber Eats platform.

The testimonials were gathered via interviews with restaurant representatives. While some quotations were taken verbatim, much of the interview has been paraphrased and edited for clarity. The entire interview, and all information shared during the interview, is not displayed. The Uber Eats partners interviewed have consented to the representation seen here.