What was the mission you inherited and how has it evolved?

When you look at the vast size and scope of the New York City hospitality industry, it’s larger than many states. There are more than 24,000 eating and drinking establishments in the five boroughs. This industry is an economic engine for New York City and it’s vital to the social landscape. It just made sense for us to have our own, independent organization to serve our city-centric needs and represent our interests in the halls of government and the media.

What was the vision of the founders of the Hospitality Alliance?

The clarity of the mission was really the part that spoke to me – providing food for homebound elderly New Yorkers. Our mission statement was “City Meals provides a continuous lifeline of nutritious food and human company to the home bound elderly in New York.” That combined with our 100% rule, the guarantee that 100% of all donations from the general public go to meal preparation and delivery were key.  I moved to New York in 1986 and Gael Greene, one of our founders, was in her heyday at the time and I used to get New York magazine and read her reviews and I couldn’t afford to go to the restaurants she reviewed but I used to live vicariously through them and it all came together.

I really feel incredibly blessed in my role here. I was initially in charge of all press outreach, writing the annual report, interviews with meal recipients and the first time I went out to interview meal recipients with our photo, the first recipient lived two blocks from where my mom grew up, and our second lived right near where my dad grew up.  And that was it. Meant to be.

What, if anything, has changed about your mission?

Our mission has not changed. What has changed is the growing need and the reliance and intensified partnership with the city, particularly around emergencies.  The city funds the preparation and delivery of meals Monday through Friday but we privately raise money to fill the gap – weekends, times of emergency.  That gap is now 2.2 million meals a year.

As you look at the issue of hunger, is the state/local/fed government doing enough?

I think we’re trying but there needs to be a recognition that the fastest growing population in this country, this state, this city, are the elderly.  By 2030 seniors will outnumber children in the city of New York.  That’s the first time that’s ever happened in this city. The city has agreed in this fiscal year to add 5% more meal recipients to the rolls, and for me, that’s an additional 8-900 people, which means that’s $1 million more I need to raise this year just to provide the same services but for an increased number of people.  We feed 18,000 elderly, and that’s about 40% of all the meals going out in the city.

As you look at the role the private sector plays in solving this challenge, how generous are people?

City Meals relies on the generosity of New Yorkers and it’s an incredibly giving family of donors.  We have over 40,000 individual donors each year, from those who give $25 a year for years to those who give hundreds of thousands and we rely on them all.  The one common thread is, 100% goes to meal preparation and delivery.  We’re able to guarantee that because of the city and the generosity of our board members and the public. 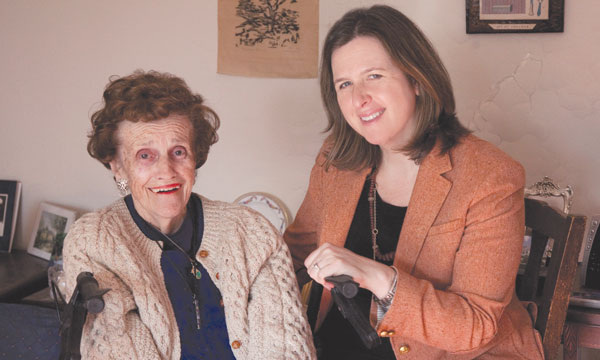 Not only are you feeding people, but providing someone who walks in and talks to them. Where did that come from?

Our deliverers and our volunteers are the connection to the outside world for many of our homebound elderly.  The regular deliverers become a part of their lives.  Brown University did a study about loneliness and isolation, which leads to depression, which leads to poor nutrition.  The study was specifically about the value of the home-delivered meal. If someone is getting the food they need but too lonely or depressed to eat it, it isn’t doing them any good.

We have trained all our deliverers and many of our volunteer staff, certainly our regulars, to recognize early signs of Alzheimer’s and elder abuse.  They’re not to deal with it, just to understand it and be able to report back, also any changes — if someone is suddenly becoming a hoarder or if their balance is off, someone who could walk to the door is now holding on to the wall, they report that.  So it’s really a safety net physically, literally, for these people.

We do a party, our star party, for the staff at these 30 meal centers around the city, and individuals will be recognized for going above and beyond.  These are people who come in and think it’s a temporary job but we have some deliverers who have been doing this for 20 years, people in the kitchen that long, who have different reasons to be inspired to do what they do.

Several times a year we’re put in life-saving situations.  Some volunteers went to deliver a meal, and the person wasn’t answering the door.  They could hear her but they had to help her open the door.  She was lying on the floor, naked since the night before.  But she knew that a delivery was coming, and it saved her life. It doesn’t happen every day but it happens every year.

Do the volunteers do anything else for the elderly while they’re there?

Yes, simple things, like carrying the trash out if they need it, or just have a conversation to keep them from being alone.  You go on a meal delivery and you get it.  It changes who you are.  I can’t imagine doing anything else, just to know how appreciative these people are.  It’s a meal but for someone to say hello, some don’t want to talk but others want to share their story. Every meal is a story.

Is the source of food from restaurants or food banks?

We have to meet federal guidelines for nutrition for older Americans so it is purchased food — 3 oz. of protein, veggie, starch, milk, bread, butter, and fruit in every meal.  They are nutritionally sound.  We’ve moved over the last five years to more whole grains.  They get annoyed, they want white bread, but we give them whole wheat, brown rice.  We have a warehouse where we do shelf-stable boxes for holidays and emergencies, and the boxes have pasta, brown rice, quinoa, tuna, salmon chicken, all packed in water, not oil.

Does this food come through traditional food distribution?

We have really good relationships with quite a few food providers.  We buy a lot direct and do some private labeling. Some of the centers work with some of the major food distributors.

What is the relationship and importance of having the chef community and restaurateurs involved in what you’re doing?

Because of Gael Greene and James Beard, our founders, our roots were in the food world.  Chefs and restaurants have been supportive and generous from day one. We continue to rely on their generosity both to participate in our events and support us in a variety of ways.  Then, two years ago, Daniel Boulud, who is our co-president of the board, started “Chefs Deliver.”  On the second Tuesday of every month, from one to 3 or 4 chefs cook 100 meals that go out to our meal recipients that are absolutely delicious but also homey and easy to eat. Most of the chefs themselves come out and deliver at least some of those meals.

So when you talk to these chefs, what do you think is in it for them?

It just is a reminder of the city that they’re working in and cooking for that and there are other people outside of those who can afford their restaurants.  It’s a reminder.  I get it.  A chef who really was reluctant to help out went on his first delivery and between the first and the second delivery, he said OK, I get it, I’ll be there without question forever. It just makes it real.  And you see first-hand how a simple meal can make all the difference. They’re real people who have built this city and we owe it to them. The chefs, once they see it, absolutely get it. The chefs cook because they love it and they like making people happy with their food. It’s just an extension of that.

We need to raise $20 million a year and we need to be increasing that as the need grows. So we do almost $6 million from direct marketing, about $5 million from direct mail, $1 million online.  The events raise another $4 million and we have four core events a year.  Our largest fundraiser is the Power Lunch for Women.  Last year we raised $1.2 million from the fewer than 400 women in the room.  Men can come for a $10,000 donation or above.  But we have more women at that level than men!

Why Many People Don’t Want to Work in Restaurants Anymore